skip to main | skip to sidebar

The Internet Archive has done a pretty good job of preserving my 'Khepri - Total Solar Eclipse Scarab God' eclipsology "web site". Here is the complete text of the original website with the two main GIF animations that it displayed - 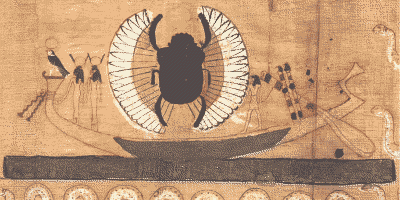 It doesn't look like Blogger likes GIF animations. . .
Just go to the archived site to view them. 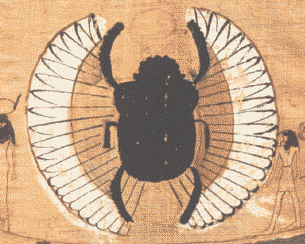 It has recently come to my attention that the Egyptian astronomer Aymen Mohamed Ibrahem, who has also extensively researched how total eclipses of the sun profoundly influenced ancient Egyptian religious beliefs, as is evident from their various creation myths and their religious iconography, has come to the very same conclusion about the scarab god Khepri entirely independently of me. The above animation clearly illustrates how the "boat of the sun" that is associated with Khepri and various other Egyptian sun gods such as Ra and the Egyptian phoenix known as the bennu bird was inspired by the thin golden crescent of the partially eclipsed sun which corresponds both in shape and in gold color to ancient Egyptian papyrus reed boats. The 19th century black and white scientific astronomical drawing of a total solar eclipse is virtually identical to this ancient Egyptian depiction of the scarab god Khepri. I intend to provide more details in the very near future, since I have a slightly different take on this scarab beetle as total solar eclipse god thesis than Aymen Mohamed Ibrahem, one that provides some additional reasons as to why the Egyptians associated the scarab beetle with total solar eclipse phenomena, but for now I will suggest reading his interesting web page about how total solar eclipse phenomena inspired the ancient Egyptian scarab beetle god known as Khepri or Khepera.

Give us a piece of your mind.